David J. Minkin has been a resident of Hawaii since 1975. Licensed in Hawaii in 1984, he spent ten years in the Department of the Prosecuting Attorney of the City & County of Honolulu before joining the law firm of McCorriston Miho Miller Mukai in 1995, where he has specialized in civil litigation in state and federal trial and appellate courts, administrative hearings, arbitrations and mediations representing individuals, corporations and municipalities. 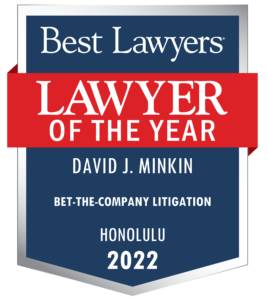